Did you see the Volkswagon Super Bowl ad featuring a pint size Darth Vader who uses the Force as he encounters the sleek, new 2012 Passat parked in his family driveway?

And so familiar. In fact, the storyline looked so much like a page out of our family scrapbook, I’m trying to remember if I ever sent in the idea to VW.

Our version goes back to my son Kevin as a three-year-old. At the time, our television didn’t have a remote control. It was basically a television that turned on. And off. With a knob. One day I got the bright idea to hook up a “Clapper” to it. You know what a Clapper is, don’t you? They’re advertised during the holidays often. It’s a device that you hook up to anything electrical which allows the “on-off” function to work via the audible sound of a person clapping.

Yes I watch too much T.V.

So here I was testing the Clapper on our television. Clapping. Television on. Clap again. Television off. I was having a grand time with my new toy. And I didn’t realize little Kevin was standing in the doorway watching me. 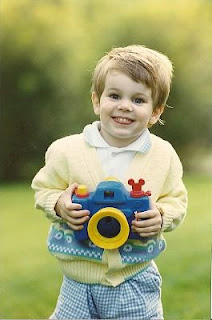 With his jaw on the floor thinking his dad was a magician.

“Hey, Bud,” I said to him. “How long have you been standing there?”

Kevin’s little blond head nodded up and down.

And then I let the jokester in me go, perhaps, one step too far.

“Kevin, I need to tell you something,” I began. “I wasn’t going to tell you this until you were five.”

Kevin no longer was blinking. He may have stopped breathing.

And I then proceeded to tell him how the men in our family had secret powers. I shared with him the truth I had been keeping since he was born: I was a warlock- a boy witch with special powers.

Kevin’s eyes were now the size of pumpkins.

“There’s a really good chance that you have special powers, too,” I told him. “If you want, we can test them out now.”

The poor little guy bit the big juicy worm of my tale. Of course he was convinced fully of his Warlockian skills when I had him stand in front of the TV and clap. And, of course he kept “our father-son” secret zipped up and under the cone of silence.

And for months, I’d hear him practicing his magical powers in front of the T.V.

In fact, I don’t ever remember telling him the truth.

So, VW, hats off to you for a great ad. I’m not even mad that you stole my concept. But – for your next ad – if you’d like to know what’s even cuter than a little toddler who thinks he has magical powers?

Go look up my son Kevin, now at the University of Dayton. You’ll find him standing in front of a flatscreen somewhere.