Why Grant Hill is a Hero

My son Kevin is wise. He always has been.

As a young boy in the nineties, there was no one Kevin idolized more than the then-Duke basketball superstar, Grant Hill. No one, no thing, no nothing came close to capturing Kevin’s passion more than Grant.

We lived in Durham, North Carolina at the time. So Duke was literally in our back yard. Cameron Indoor Stadium was a place we had access to – it wasn’t unusual for me to take Kevin over there to sit in the stands on a quiet Sunday morning and absorb the magic that existed within the four walls of the Blue Devil’s home court.

But this isn’t a story about Duke or our family’s love for them. I know others don’t share that feeling. At all.

This is a story about children. Heroes. Role models. And why I’m glad my son chose his wisely. Even as a little four-year-old.

Kevin’s infatuation with Grant Hill had as much to do with who Grant was as a young, approachable, admirable, honorable, joyful, respectable young man as it did with him being a phenomenal athlete. Oh yeah, and he was black.  A fact that made zero difference one way or the other. Living in Durham, Grant was just one of the Duke guys. He was one of our own. He was a young man who showed outward love and respect for his parents. He was grateful. To everyone. He was humble. He was strong. He was gracious. He volunteered. He cared about his reputation and knew the impact he had on others. Especially young kids like Kevin. 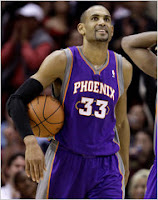 And in the years following Grant’s graduation from Duke in 1994, my opinion of him has only grown deeper. Yep, I still look at him as my boy’s role model. Truthfully, I like that.

That’s why I was especially proud of Grant’s letter in The New York Times – The Quad this past week.  His letter was in response to comments made by a contemporary of his, Jalen Rose, in a recent ESPN film about the Michigan basketball team’s famed “Fab Five.”

I’m not about to begin opining on Rose’s comments or weigh in on the subject at hand. But I do wish to weigh in as a dad who still sees the value in role models for our sons and daughters. Reading Grant’s letter in response to Rose’s statements reminded me of that.

And it reminded me, once again, that our children – even our four-year-old children – can make very wise choices.